Pre-dawn on Sunday 4th September, the alarm toils like the watchman’s bell.


Looking out. A sky that hints of promise, a sky full of threat. What will the day bring? All I know is there’ll be 2000 fellow athletes and peers on the prom in Salthill within the next short while, full of eager anticipation.


At 11:30 last night I woke up thinking I’d wet the bed. I was soaked to the skin. Hopefully this was the breaking of the fever and I’ll be right for the day.

Breakfast was a protein shake first thing whilst waiting for the porridge to cook. A decent bowl of porridge with honey and a pair of mugs of coffee and we were off. 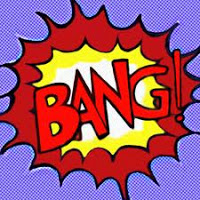 Arriving in Salthill it was time to place all the planned nutrition with the bikes, check the tyres, bring the pressure up to 120psi. I’ d heard a few tubs had gone ‘Bang!’ in the night due to the cold air and another one went close by.


Planned pre-race nutrition; energy drink for next hour and nibble on a bar plus x1 Kinetica gel 10 minutes before the swim start.

Planned on the bike nutrition; x3 Kinetica gels (10, 45 & 80k marks), x2 Powerbar Energise bars (nibbled over 20-30k and 60-70k), Kinetica Tricarb drink up front in the profile bottle, bottle of water in the cage. Leaving a spare cage for on route pickups. Shoes and socks I decided to leave in the blue bag.


Planned on the run nutrition; x 2 Kinetica gels (9 & 16k marks). I could pick up water and additional gels / Gatorade if necessary along the run route.


Food left on the bike, it was time to get parked, grab a coffee, relax and gather the nerve for the coming hours.


An announcement was made that the swim was being reduced. A bit of confusion as to whether it was being delayed or reduced. As it turned out both. Due to a rip current in the bay the swim was reduced to 750m (officially measured later as 1000m) and the waves were being broken up into smaller groups. This meant that I was going off at 8:00 as opposed to the planned 7:35.

Changing into the trisuit (new & untested, not the best idea!), on with the calf guards, long sleeved top(HR strap underneath), Bodyglide and wetsuit. Of course just as you have all this on, final toilet stop required! All the warm gear goes into the white bags along with non race shoes and you drop this at a steel container on the prom.


Shuffling down the ramp into the holding area you feel like a zoo animal with hundred’s of people looking over a railing at you preparing to go. Spotting a few familiar faces, there was plenty of nervous chitter chat going on. Some club mates standing nearby, quick handshake, good lucks all round and then we were set free.

After rinsing the goggles, flushing the suit and backing up to the start line. We waited for the gun. (I had received a tip regarding a rip current to watch for. So basically while the swim was 750m you need to pace for 1500m as that was what you would be swimming.)


And off we went some 300 souls in a melee of swinging arms, kicks, ‘friendly’ punches into the bay. Sighting was easy, the buoys were huge and all you had to do was wait for the swell to lift you up 5′ for sighting. The biggest issue was swimming sideways!


Once sighted, line yourself up and go for it. When you next lifted your head the current had pushed you sideways so you were facing away from the buoy by 30 degrees, so it was constant adjustment. 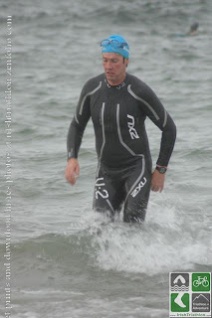 Left turn at the first big buoy, parallel to the shore and we were head into the current and swell. The marshals did a good job of correcting us and keeping us notified of the drifting effect.

I found the swim difficult due to the current but not impossible. Hitting the beach a few people from the next wave started to pass me  but that’s normal for my swim stage. I left the water quite fresh, no pounding heart rate or any of the normal effects.

This meant that I was comfortable dropping my wetsuit, not gasping for breath and was easily settled into a stride for the long haul to transition.


Transition Swim to Bike (T1)
Leaving the swim the exit from the beach is up a ramp to the prom. Turn right and run 400m to the T1 tent barefoot on the concrete across the car park.


Passing through the tent you pick your blue bag from the numbered rack, out the back to an area with tables and seats. There were volunteer strippers there to help remove wetsuits and a quick change to bike gear (I planned no socks, just shoes with light covers, a short sleeved gillet and glasses) and off you go for the next 700m to the bike exit, collecting your bike along the way. I stayed barefoot until I reached  the bike, put on the shoes (I did the helmet in transition) did up the covers and ran with bike to the exit.


Jump on at the mount line and off you go. 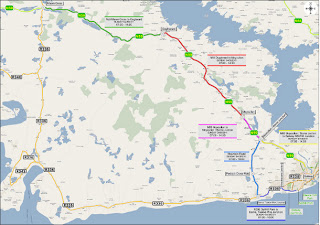 I knew exactly what I had to do on the bike. My plan was to settle quickly into the aero position and pace myself carefully. All the more important in light of my ‘weakened’ state.


I has aimed for a budget time of 3hrs and had lately hoped to get 2:45 or thereabouts depending on the course / conditions.


Nutrition could only be done properly on the bike and this went to plan. I took the first gel at the top of the climb in Dangan before the downhill to the main road.


There was a lot of bike traffic and to the knob who refused to move over on the road, from the solid line, despite letting him know I was ‘behind on the right’ and indicated that I should undertake him, you’re a twat who needs to read the rules of Triathlon before he races again.


Once on the main road, the wind was behind us so I knew it was important to manage this to avoid blowing up on the home leg. I felt good on the bike and got a great lift when I saw Conor flying back mixed among the pros. He did a smashing bike split. 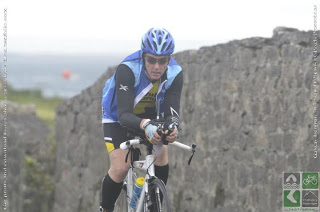 The conditions on the bike were terrible. A lot of surface water spraying up and plenty of rain coming down. There was tremendous support from spectators along the whole route and it was very uplifting to see them under their brollies, shouting and cheering.

There were a number of quite serious looking accidents, resultign in bodies being littered along the course. It seemed that the conditions were to blame as much as a lack of bike handling skills. Quite a few people were trying to get food on board and we swerving about on the road showing a lack of skill and general awareness of people around them. It only comes with experience and we are all still learning. The ambulance was required for several of the crashes and there were a few fine bikes left lying on the route for the ‘broomwagon’.


I was happy with my pacing and kept the pressure on myself all the way home and ultimately pulled back into Salthill with a bike split of 3:00:13. Not bad planning!

Arriving back into transition, dismount at the line and run with the bike to the racking point. Unclip the helmet and run on to the second tent. I lost a shoe cover along the way, its always something off my left foot, it was a shoe in Hell of the West!

Passing through, picking up the red bag, remove the bike jacket, grab the runners & cap, change, drop the gear in the bag and off for the run. 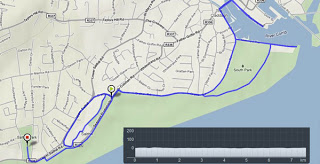 Starting the run I felt fresh on the first full 7km loop. I made use of the water stations, getting fluid on board at the two stations on each loop.

Starting out on the second loop I spotted Edel at the barrier, which brought home the fact that she was pulling out of the event. She had said that she wasn’t happy about the run as she hadn’t been getting out to do many run sessions. Fair enough. It still upset me. I had a notion that we could complete our first race together, not necessarily crossing the line together cos that would mean I’d been ‘chicked’ but that we would complete the race.

Anyway, I got through to about 13k and then the wheels started to come off. I had started out really steady aiming to settle into a 6min/km pace which I did through the second 5k. Once I hit 11km my pace dropped to about 6:30min/km and on the third lap it went completely erratic. I spent quite a bit of time walking.


My nutrition had worked out fine. It was actually fatigue that destroyed me. Having been feverish, broken sleep meant I was simply not rested enough. 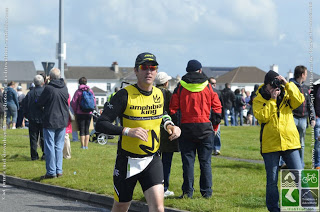 Emotionally I was shot and it took all my effort to actually get back. I knew where people who knew me were standing so I made every effort to look like everything was OK. Every time I passed my old coach, I had this cheery grimace on my face.


Coming back by Grattan beach for the last time I dug deep and pushed on. I kept telling myself another 200m then you can walk. And another 200m until the length of the bike transition was done and I hit the street within the last 1km.


The crowd gave me a huge lift and I finished in my usual style of a nice kick for the line. Its funny how the mind and body work.

Crossing the line was fantastic. Hearing Mike Reilly call out my name was great. Getting my medal, wow!

I earned that medal!

All in all my run was 2:11 and change. A good 25mins more than where I had hoped to be but that’s the rub of the day thats in it.

All I wanted was my wife to say thanks for the support through the training.

My official finish time when results were released was 5:54:55

2 thoughts on “HIM – Day: The Storming of Ladies Beach”