Tempo run planned for this morning.


Set off nice and easy, usual 15minute warm up followed by a step up in pace for 12 minutes and a steady 28 minutes in Zone 3.


The problem was I developed a pain in my right knee. I’ve been pretty religious with my rolling with The Grid but had a high volume week last week (relative to my normal running) so I put it down to wear and tear.


I haven’t really been troubled with the muscle soreness or joint pain you hear all the horror stories about, so far. Bar a little discomfort in the afternoon after a long run handling the stairs I’ve been pretty good.


This pain is something new to me. It’s like ITBS but it’s not. I’ve had not ITB problems since I learned how painful it is to release the band, so I look after it.

I ended up walking in the last bit of the run and there’s no clicking. Just a sharp pain. A bit of rest and ice should do it.

Its so easy to break the habit of regular updates on this blog.

This is the first Sunday LSR with my training partner as we get into the final push of the build to Dublin Marathon. Our plan is to gradually increase the Sunday run from 26/27k to 32k over the next 4 weeks before starting to ease back on the final fortnight run in to the event.

At this stage I have started to leave the Endurance running program as designed by www.polarpersonaltrainer.com behind in regard the long runs. The program is not specifically tailored for the marathon and is a general program for developing endurance.


The long runs are being done as empty as possible. Starting without food and only bringing water or electrolyte drinks to ease the thirst. We each have a couple of gels along for the ‘just-in-case’ senario.

The run out to the main road is grand. There is nothing really to say about it other than its nearly 3 hours of running along the side of a road. We were being conscious of the camber and the possible effects on the body as the result of excessive angles.


Over all the run was steady, I again was using the stride sensor and the figures are slightly out with the actual measurements, about a km short when compared to the Garmin measurements. 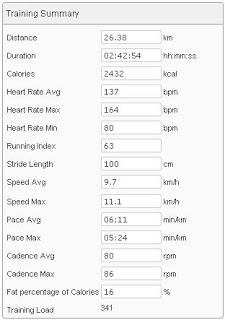