Skip to content
October 2, 2013October 2, 2015 RunningMatters
Starting from a Twitter conversation, I reckon it’s time to put some information on paper about HiVis / Reflective gear.

With daylight hours being so short now and visibility so ‘grey’ you as a runner / cyclist / pedestrian have to take matters of your own safety very seriously.
Place yourself in the driving seat on a winter’s day, low sun reflecting off damp road, rain blurred windshield, how much can you see?
Not much, everything looks grey.
As a pedestrian if you can’t be seen against this background you are in serious trouble.

This is where HiVis clothing comes into it’s own. Most HiVis clothing or vests feature reflective strips and DayGlo colours. The most common example is the Vest below, commonly used by walkers and cyclists, though they can be billowly and uncomfortable for running with:

The reflective strips flash when light hits them highlighting that there is an ‘object’ ahead. The colour is DayGlo yellow which functions brilliantly in daytime (hence the name), every driver slows when they see a flash of yellow in the distance, but serves no function at night.

Normal color absorbs and re-emits a portion of the visible spectrum that matches its principal wavelength, while the remaining colors are absorbed and dissipated as heat. In this way, a regular yellow color re-emits back to your eye just the narrow yellow band of the visible light spectrum. Therefore, if there is little or no yellow light around (such as early dawn or dusk) the yellow surface would appear dark or even black.

DayGlo provides daytime visibility by ensuring you standout from your background.

We recommend for anyone running, daytime or nightime, to keep it simple and use a combination of the following:

Clothing or outerwear must be flourescent and retroreflective. Colour patches serve to break up your outline and provide contrast so that you appear as a human shape in the dark, not just some litter fluttering in a ditch.

Look at how the runner ‘pops’ out of this background – 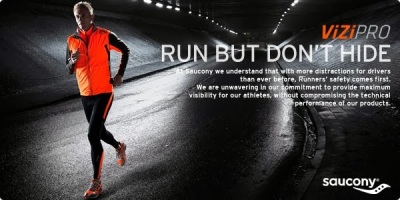 Fluorescent colors use a larger amount of both the visible spectrum and the lower wavelengths compared to conventional colors. They not only absorb and convert light energy of the dominant wavelength, but also the wavelengths of ultraviolet rays and other colors lower in the visible spectrum. As a result, your eye perceives a far more intense color.
Where a clean, bright conventional color is able to reflect a maximum of 90% of a color present in the spectrum; a fluorescent color can reflect as much as 200% to 300%.

A retroreflector (sometimes called a retroflector or cataphote) is a device or surface that reflects light back to its source with a minimum of scattering.

Use a headlamp. Even if you are comfortable with where you are running and know the surface like the back of your hand, a decent headlamp will always help draw attention to your outline. Who doesn’t spot a light source 5-6′ off the ground and wonder what it is?

Use a flashing rear facing lamp. Just a small detail but very often we are focused on being seen from the front and often forget about some small details on the rear. Whether its a bicycle style rear light (red lens) attached to a backpack or a blinking light at head level it doesn’t hurt to have a little bit of extra visibility.

Carry ID. A phone with ICE contact or ideally an ID bracelet should the worst ever happen.

Be defensive. Try and view yourself from a driver’s perspective. What can you see? Run against traffic, behind cars at intersections, and avoid areas that might not be super safe.

How have you dealt with visibility when running or cycling?